All revisions are for FREE

Proceed with your Order

What does the word LAN mean that we hear everywhere in computer networks? LAN - Local Area Network - is according to Wikipedia's definition “ a computer network such that the terminals participating in it (computers, etc.) send each other frames at the link layer without using an intermediate router “.

Basically, at home, you can make your computers communicate with each other, whether wired or Wi-Fi, print on the network printer, play network games with the family. Without needing a router or your box, all you need is a switch for it to work.

Today, everyone has a box at home, and it is very often this box that acts as a switch (the famous 2 to 6 ports located behind your box). But be aware that for example, when you start printing from the PC to the network printer or when you download documents from one PC to another, your box does not use the routing function, but it only switches your packets from one port to another, that's all! Here, let’s look into the different network topologies.

There are several network topologies to allow this communication between PCs of a local network called LAN; four main ones can be retained:

The four PCs are connected to a network device called a hub. When this equipment receives an electrical signal from a PC, it broadcasts this electrical signal to all ports except the port on which it received the signal.

All the peripherals (PC, printer, etc.) receive the computer signal, i.e. when a PC sends a data frame; all of its neighbors receive it. We can physically schematize a bus topology like this: Called a Token Ring topology, a special 3-byte frame, called a token, travels through the network through PCs in one direction only. If the PC needs to send data, it waits to receive the token (imagine it is a wagon), checks that it is free, and inserts its data to send it back.

As the token goes around all PCs, the recipient will receive the data.

We can physically schematize a ring topology like this: 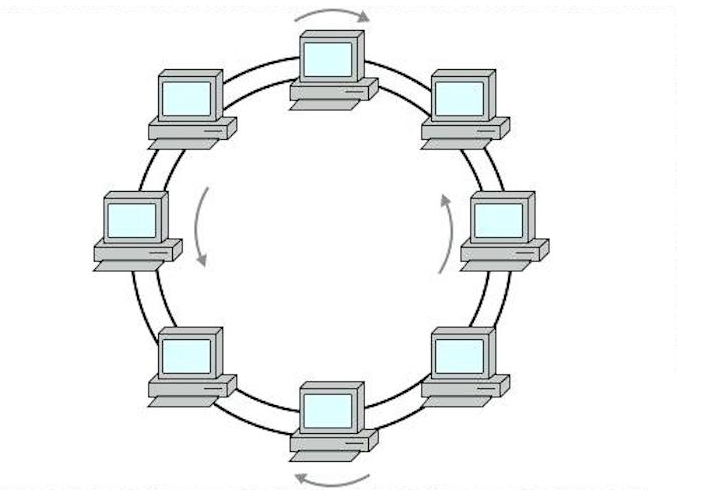 Each PC is connected to the ring switch, called MAU – Multi-Station Access Unit. The latter is responsible for passing the token successively through each of its ports. What happens if the token (wagon) is already in use by another PC? Well, we wait for the recipient of the message to receive the token and unload the data in order to release it.

The principle is the same as the ring topology except that an additional ring is added which will serve as a backup in the event that the primary ring fails. One technology that uses this topology is FDDI - Fiber

Here is a diagram that is worth more than a speech: 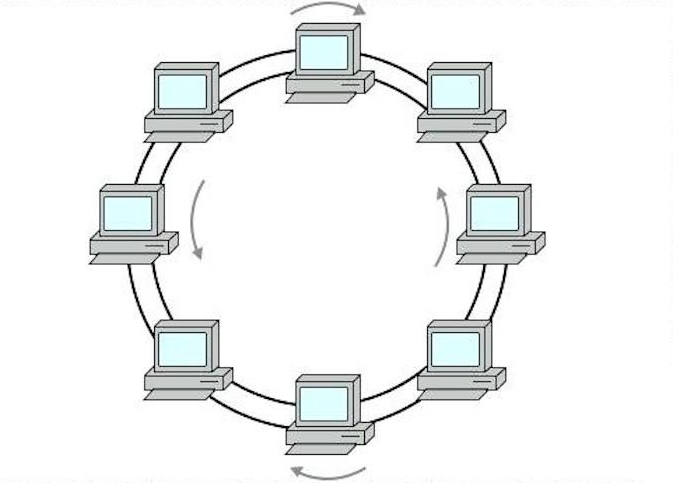 Each PC is directly connected to the switch, and it is the latter which is responsible for transmitting the data. But unlike the hub, the switch does not propagate the data as to the port connected to the destination PC, not to all ports.

We can physically schematize a star topology like this:

The hub topology is outdated due to HUB equipment which has the following constraints:

- one and only one machine must transmit at a time t

- the probability of collision is very high (i.e. 2 PCs sending data at the same time)

Today the single and double ring topologies have been replaced by the star one, which is faster and simpler.

Each PC is connected to a switch and in a large topology; we connect switches between them to have a higher density of ports.

- the PCs are connected to switches

- the company's servers are also connected to a switch

- The switches are connected to each other by a router. The presence of the router here comes from the fact that we want to go out to the Internet (the blue cloud)

, its presence is therefore mandatory.

Looking for
an ideal essay?

Our expert writers will write your essay for as low as

Achieve your academic goals with our essay writing experts!